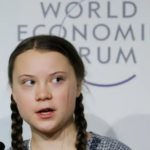 In a lot of online and paper publications as well as on television Swedish student activist Greta Thunberg (16) did it again. Being invited to the World Economic Forum (WEF).
She single handedly silenced a room full of global leaders with financial, political backgrounds and media spectators with her soft voice speaking truth to power.

Again she calls everybody present to action and stop talking and get going. “we are running out of time!”.

practice what you preach

An estimated 50 delegates of the World Economic Forum did arrive in their private jets talking about reducing the carbon footprint while Greta Thunberg took a 32-hour train from Sweden to Davos. On top of that she is also camping out in a tent in below zero temperatures instead of staying in a luxury hotel like the rest.

The irony of Davos’ where billionaires discussing combating carbon emissions. In the process, she is giving Davos a run for its money.

“At Davos, people like to talk about success, but financial success has come with a price tag, and on the climate we have failed. And unless we recognize the failures of our system, there will be unspoken suffering.” Referring to more than 6000 peer reviewed studies from wich scientists conclude that if no action is taken irreversible consequences will be part of our not to distant future. The worldwide trajectory is that we are not going to stay within the 1.5°C temperature rise. We even will go beyond the 2°C with devastating worldwide consequences. Humanity has to reduce carbon emissions by more than 50% within the next twelve years. “We are less than two years away from being unable to undo our mistakes,” Greta warned her audience.

Greta ended her speech with: “I often hear adults say: ‘We need to give the next generation hope’,” she concluded. “But I don’t want your hope. I want you to panic. I want you to feel the fear I do. Every day. And want you to act. I want you to behave like our house is on fire. Because it is.”

One Reply to “Panic like “our house is on fire””