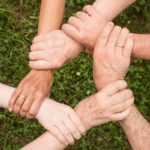 Not many Homo Sapiens are aware that their habitat is in danger of their own doing.  A majority ís talking about the consequences but pointing at others to make the first step or blaming them to be the bigger polluters.

Basically what they say: ”I am not doing anything, I am not changing my ways before the other does”. The other as in the big top 50 most polluting industries, the enormous container ships, or our neighbors with the jacuzzi in the garden and a big BMW in the driveway.

And then as our government is going to take action people are complaining: “this is unfair, we are paying the bill where we are not the ones emitting the greenhouse gases, they are!”.

Every single day, by every single action, with whatever The Naked Ape is doing, he is poisoning his environment. This environment is the single most important circumstance that allows him to live on this 3rd rock from the sun. He is only protected by a small atmospheric layer of about 13 km on a average (called Troposphere) of the surface where three quarters of air suitable for use in photosynthesis by terrestrial plants and breathing of terrestrial animals exits. And precise that part, including all the water mass and topsoil is being polluted as we speak.

It all comes down to taking responsibility not shifting it to others thinking it will last my days not taking in account that there are far reaching consequences for our kids in the very near future.

The 3th industrial revolution brought us wealth together with a reasonable abundance of food, energy and mined raw materials. The consequences of choices made in the past brought us here.
All systems that sustains city live are based on fossil fuels. Leave them out, cities become uninhabitable in days, maybe weeks. For the millions depending on the fossil powered systems and structures in urbanized areas there will be no way out. A century ago there still was lots of animal power, like horses. Now the only thing we have is a bike.
Depending on infrastructure to get food from A to B. Were A most often means big distances -even continents- away. So horse power or a bike won’t do anymore when fossils are out.

The consequences of what every individual Homo Sapiens every second of the day does are poisoning their habitat. This influence is an empirical fact proven by more that 6000 studies.

The consequences will be massive and hardly reversible by human hand. If more and more tipping points are a fact of the past there is a very real chance on a unstoppable Climate Runaway rendering many big land masses worldwide uninhabitable (read future articles about this “Resources and Systems the Naked Ape is depending on”).

The chances are that we will not be able to sustain 7+ billion naked apes because they will literally standing naked and empty handed without any resources.

It’s how we treat the world around us with our actions that will help cause that terrible environmental disasters. And if you are not aware, or just don’t want to see it, statistically the number of disastrous weather occurrences are increasing. Already some twenty to thirty years back the first climate refugees occurred and today many more are fleeing from a increasing amount of uninhabitable places. Of course critics will like to have us believe this is a natural occurrence already happening to us on this 4.5 billion years old rock since it existence. Through, but microplastics in our oceans and drinking water as well as poisoned air, to name two, by our own doing, is not natural. This is us not taking responsibility for the habitat we live in. By using resources linear and discarding them then and there where we are, without a thought to who has to clean that up.

[Coming picture: the ever steeper line of necessary reduction if we want to stay within the 2°]

Saying, believing and acting this way has brought us to this point in history were we are still able to minimize the consequences of our actions from the last two hundred something years. We have no Carbon-Budget left to use. Humanity is out!

No action will push earth temperatures past the 2°C rise with unstoppable results. Then this rock will go over many tipping points. Every individual tipping point will have influence on others. The fear among many climate scientists is that, if humanity will keep going as “business as usual”, there will be a domino-effect cascading into a Climate Runaway (Runaway Greenhouse Effect).

Where will you hide? And how are you planning to feed yourself and your kids? Got the plans in place? The wealthy and “happy” few are betting on New Sealand by buying property there. What are you doing to prepare?

I think, my humble opinion is, if humanity likes to stand a chance to, sort of survive this, we should start treating our habitat as a sacred place and be very careful with everything we do or don’t do. Earthlings actions from now on decide what will become of our civilization as we know it today.

The big question will be if the habitat of The Homo Sapiens will sustain live. And if so for how many if us, and in what areas.